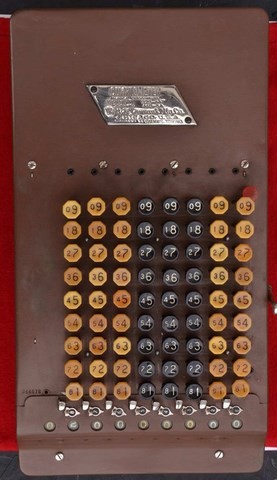 The comptometer was the first commercially successful key-driven mechanical calculator, patented in the United States by Dorr E. Felt in 1887.
A key-driven calculator is extremely fast because each key adds or subtracts its value to the accumulator as soon as it is pressed and a skilled operator can enter all of the digits of a number simultaneously, using as many fingers as required, making them sometimes faster to use than electronic calculators. Consequently, in specialised applications, comptometers remained in use in limited numbers into the early 1990s, but except for museum pieces, they have all now been superseded by electronic calculators and computers.
Manufactured without interruption from 1887 to the mid-1970s, it was continuously improved. The mechanical versions were made faster and more reliable, and then a line of electro-mechanical models was added in the 1930s. Notably, it was the first mechanical calculator to receive an all-electronic calculator engine in 1961, with the ANITA Mark VII model released by Sumlock Comptometer. This created the link between the mechanical calculator industries and the electronic.
Although the comptometer was primarily an adding machine, it could also do subtractions, multiplication and division. Its keyboard consisted of eight or more columns of nine keys each. Special comptometers with different key arrays were produced for a variety of special purposes, including calculating currency exchanges, times and Imperial weights. The name comptometer was formerly in full use as a generic name for this class of calculating machine.

The comptometer is the direct descendant of the key-driven machine of Thomas Hill patented in the United States in 1857 and of the Pascaline invented by Blaise Pascal in France in 1642. By just replacing the input wheels of the Pascaline by the columns of keys of Hill's machine, the comptometer was invented. Addition is performed exactly the same way, and both the Pascaline and the Comptometer make use of the 9's complement method for subtraction, but in the case of the comptometer it is the operator who must choose the right keys for the subtrahend (each key has its 9's complement written in miniature letter next to it).

Dorr Felt began his work on comptometer in 1882 and started building the first prototype during the American Thanksgiving holidays of 1884. Because of his limited amount of money, he used a macaroni box for the outside box, and skewers, staples and rubber bands for the mechanism inside. It was finished soon after New Year's Day, 1885. This prototype, called the macaroni box, is in the Smithsonian Institution in Washington, D.C., United States.
Shortly after, Robert Tarrant, the owner of a Chicago workshop, gave Mr Felt a salary of $6 a week, a bench to work on and what would add up to $5,000 to build his first practical machine which he finished in the autumn of 1886.
By September 1887, eight production machines had been built.

The original comptometer design was patented by Felt, on July 19, 1887, and on October 11, 1887. Two years later, on June 11, 1889, he was granted a patent for the Comptograph.[6] A Comptograph is a Comptometer with a printing mechanism making it more like a key-set calculating machine (even though the keys are registered as they are typed and not when a handle is pulled) therefore slower and more complicated to operate. It was the first printing-adding machine design to use individualised type impression which made its printed output very legible.The first comptograph was sold to the Merchants & Manufacturers National Bank of Pittsburgh, PA. in December 1889. It was the first sale of a recording-adding machine ever. This machine is now on display at the Smithsonian Institution in Washington, D.C.
The Felt & Tarrant Manufacturing Company built both comptometers and comptographs throughout the 1890s. In 1902, the Comptograph Company was set up to manufacture comptographs exclusively but was shut down at the beginning of World War I.
Forty years later, in the mid-1950s, the Comptometer Corporation reused the name Comptograph for a line of 10 key printing machines.

The comptometer was the first machine in production to challenge the supremacy of the arithmometer and its clones; but not immediately, it took almost three years to sell the first hundred machines